Well, if you are using or going to use WordPress; there are a few major SEO plugins. It is tough to choose any one of them. Where Yoast SEO holds a major stake in the SEO plugin industry; on the other hand, Newly launched Rank Math SEO plugin also roars.

Before discussing Rank Math vs Yoast SEO plugin, let me brief you about SEO and SEO plugins.

What Is An SEO Plugin?

An SEO plugin is a piece of software designed to optimize any blog or website. It helps us to optimize our blog or website according to the standard set by search engines; especially by Google as Google is a major source of traffic for everyone.

How Does An SEO Plugin Work?

SEO plugin calculates your content on the basis of search engines’ (Google) standard and makes it more crawlable by search engine bots.

Rank Math Vs Yoast SEO Plugin: Which Is The Best?

Rank Math SEO plugin is very new and launched in 2018 by MyThemeShop.com. MyThemeShop is a well-known name in the field of WordPress themes. Rank Math is free for everyone. In a very short span, Rank Math is becoming a choice of webmasters. It has 70,000+ downloads at the time of writing this post.

I am not hesitant to call it a King of SEO plugins. Yoast was created by Joost de Valk in 2010. In a very short time of periods, Yoast became a major player in the SEO industry due to its simple interface and capability. However, with the time other plugins also came in the market and few old such as All In One SEO but could not become popular as Yoast. It has 5+ Millions of downloads at the time of writing this post.

Import Data From Other SEO Plugins

This is a major part if you are moving to any other SEO plugins. If you have a big site and thought to move another SEO plugin can be very hectic if your new SEO plugin does not provide a function to import SEO settings from old plugins.

Rank Math has the capability to import old SEO settings in it. It can easily import SEO settings from two major plugins; Yoast SEO and All In One SEO. It will show you an old SEO plugin and import option. Including other plugins settings as well such as XML sitemap, Redirection plugin, etc. Rank Math has these options integrated into it. 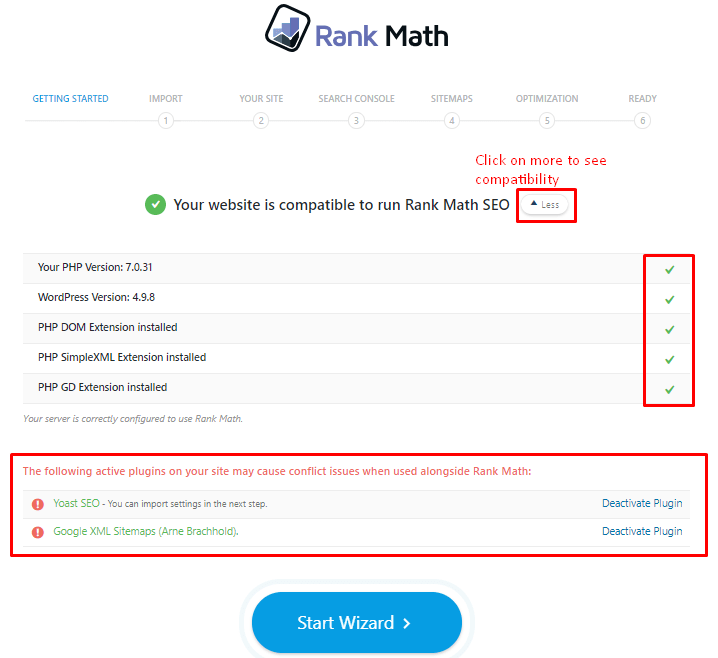 Yoast SEO also has the same function but I did not see it working. Probably it only works with All In One SEO Plugin. I installed two SEO plugins but it shows a message that “Yoast SEO did not detect any plugin data from plugins it can import from“.

Yoast and Rank Math both have a very clean and user-friendly interface. You can easily find the required functions. 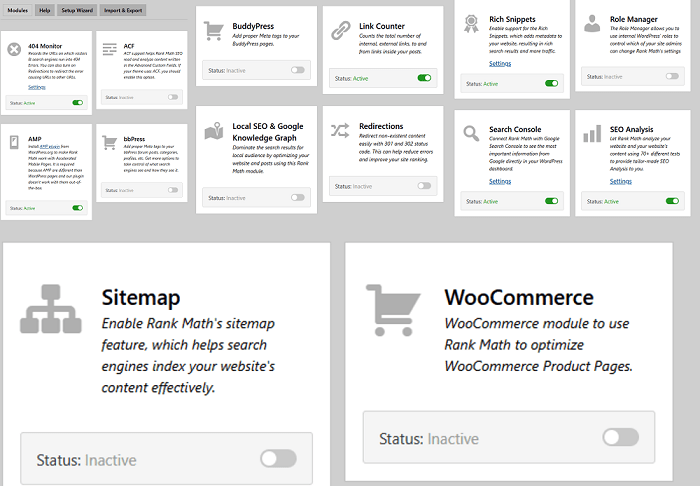 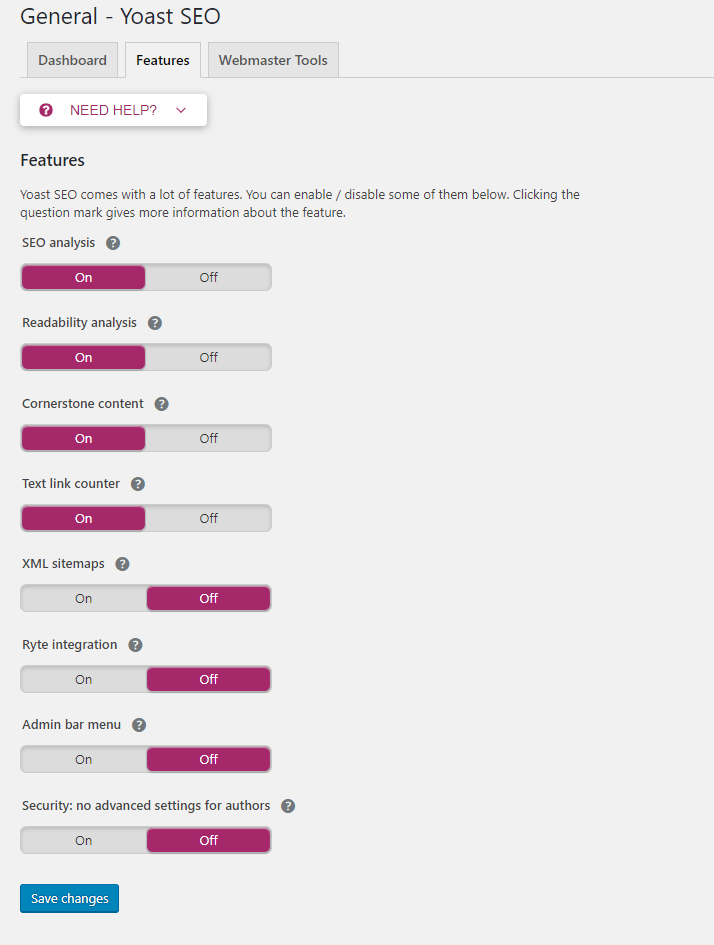 One Time Set up Wizard

Both plugins are good in keyword optimization. Yoast and Rank Math both calculates keyphrases. However, with Rank Math, you can optimize your post for up to 5 keywords or keyphrases where Yoast doesn’t provide this function free of cost.

The following parameters are common in both plugins to calculate keyword throughout the post.

Yoast tells you that if you over-optimized your post or not with keyword matched counts. Which is good for SEO.

But Rank Math lacks here. Rank Math does not tell you that you over-optimized posts or not. However, it too shows a count of the keyword.

It will only show you the keyword density and count but will not tell you that you over-optimized your post or less optimized, the color will be in grey in both instances, you have no idea what happened. 🙁

However, if you click on the question mark in the blue circle, there is a message put by Rank Math that, “There is no ideal keyword density percentage but it should not be too high the most important thing is to keep the copy natural.”

Both plugins check many parameters to analyze a blog post. Yoast shows them in Good or Bad and Rank Math gives the number out of 100. However, you can also check all parameters in detail in both plugins.

Rank Math has this unique function to track your keyword ranking in Google. You don’t need to open the Google Search Console to check or any other SEO tools to check keywords ranking.

Rank Math made your work easy. It integrates with Google Search Console and shows data in Rank Math.

Yoast does not provide this function. 🙁

Rank Math has an inbuilt SEO analysis function. You can audit your blog at any time. No third party software is required. Yoast does not have this type of function.

Rank Math shows internal link suggestions as well. Yoast also has the same function but not for free users.

Rank Math and Yoast both have advanced broken links redirection manager but Rank Math gives you it free and Yoast charges for it.

Rank Math introduced role manager function in SEO plugin. It is very useful if you have multiple authors. You can set different roles and prohibits access. Yoast lacks here.

Google started focusing on the snippet and in a blog post, Google clearly said that they are focusing on Snippet. You probably received some error message in AMP pages in Google Search Console that image size is small.

Rank Math quickly adopts the Google update and released a new version of the plugin. I still don’t see this in Yoast.

Google released a few more tags for links such as “Sponsored” and “UGC”.  Rank Math is quite ahead from others to make changes in its SEO tool. You need to decide what type of link you have, “no follow” or “sponsored”. No third party plugin is required.

Both SEO plugins analyze the readability of the copy you wrote and calculate the Flesch Reading Ease score.

Yoast SEO has plenty of parameters to calculate the content readability score. 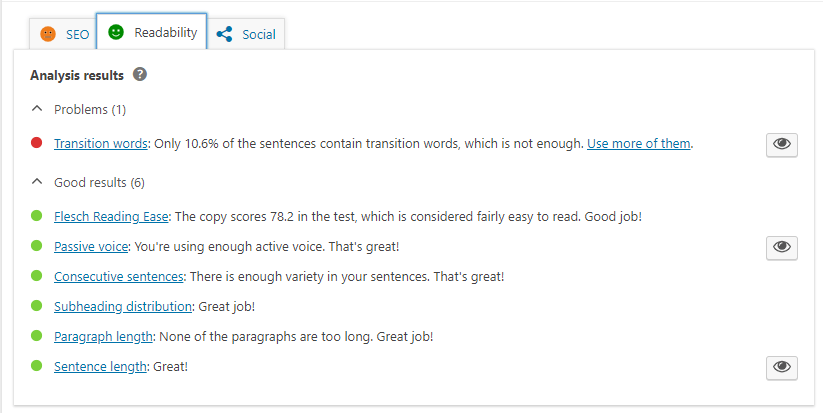 Whereas, Rank Math has fewer points to calculate it.

Both are giving you full control over your blog’s breadcrumbs.

Rank Math and Yoast both are providing an inbuilt sitemap functionality. Both notify search engines; such as Google and Bing once a post gets published.

Both plugins give you an option to handle your Robots.txt and .htaccess files.

Yoast also provides support but only for premium users. 🙁

Rank Math and Yoast SEO both are good. Yoast has a long history and a huge user base where Rank Math is a very new but the parent of Rank Math; MyThemeShop has a strong presence in the WordPress theme’s industry and popular for his excellent themes and support.

Sometimes Yoast comes up and sometimes Rank Math. We found no one is winning at this time. Yes, definitely Rank Math is providing lots of options in a single plugin and free of cost where Yoast has fewer options and everything not free.

⇒ If you see by a point of view of functionalities, Rank Math clearly triumphs over Yoast. It again depends on your need such as Role Manager: I don’t need that function but maybe you need.

⇒ If you see by a point of view of simplicity and less optimization, Yoast clearly wins here. Yoast looks very easy to handle. Many of the functions Yoast itself handles such as subpages example.com/page2/.

Rank Math earlier had some stability issues. Rank Math team pro-actively fixed all bugs or issues immediately. It looks stable now. You can use it without any fear. Yoast WordPress SEO plugin has no such issues.

Rank Math did many changes in it and making it very simple for everyone and adopting updates very fast. Once I left it but again started using it.